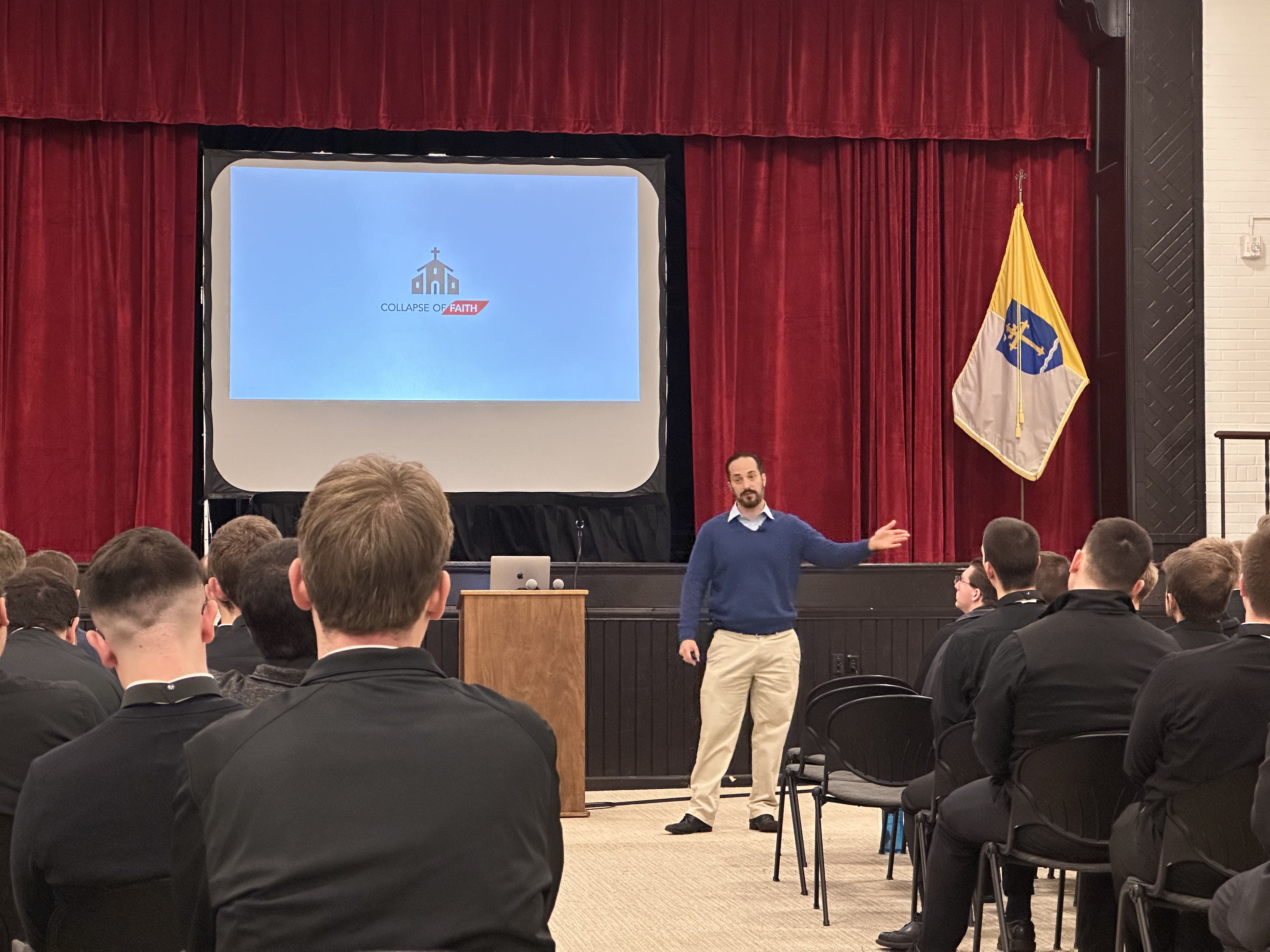 Photo above: Communio President JP De Gance speaks to seminarians at Kenrick-Glennon Seminary in St. Louis on the “mindset shift” that needs to occur around ministering to marriages to produce truly fruitful evangelism in the 21st century. Most of these seminarians will lead their own churches in 24-36 months.
__________

I’m fired up by progress we’re seeing across the country.

Let me give you a flavor of what we’re seeing.

Our team ran a second quarterly Marriage Collaborative in the Dallas-Fort Worth area with churches representing more than 15,000 Sunday attendees.  This ecumenical undertaking involved pastors and church leaders from Baptist, Church of Christ, Presbyterian, Methodist, Bible, and nondenominational churches.

This included long-time partners such as First Burleson and Fellowship of the Parks – but also included pastors from new partner churches and a few considering a new partnership.

These Marriage Collaboratives are working meetings where our church engagement and church strategy teams in North Texas roll up their sleeves with pastors to share best practices for evangelizing through marriage and relationship ministry.

I was scheduled to join the group, but Secretary Buttigieg and the FAA had some other plans for me last Wednesday.

Now, this past weekend, one of the largest churches in Austin, Texas, Life Family – a church of more than 6,000 just deployed Communio’s first-party survey at their main campus to get an overall grasp of the relationship health of their people.

We’ll unpack this survey data during our upcoming strategic planning session along with data gathered from Communio Insights®, our proprietary software with ministry models built from our national consumer data file.  Their leadership includes their lead pastor Randy Phillips of Phillips, Craig, and Dean – one of the all-time best-selling Christian music bands.

Our strategist and engagement team will help Randy and his team set up measurable goals to strengthen relationships and marriages and grow their church through a 24-month written plan.

This is just one example of the many new church partners Communio is onboarding during this winter church trimester.

And, let’s face it, the need is huge – 85 percent of all churches still report spending nothing in the areas of relationship and marriage health.  Marriage sits at a historic low and the number of children born without married parents remains at historic highs.

America leads the globe in the share of single parent families, which is the under-reported cause of the world’s largest income and wealth gap.

Yet, I’m incredibly hopeful.  Communio ended 2022 supporting more than 170 churches – 2/3 Protestant and 1/3 Catholic – across the country.

Our church engagement team has been having conversations with a rapidly growing number of churches – evangelical, Protestant, and Catholic – interested in ramping up their ministry in the fight to save the family in their community.

We’ve built out a two-phase National Strategy to Save the Family, which involves supporting 4,000 churches by the end of 2030.  In the coming months, I’ll have much more to share on this project.

One key to reaching that culture-changing 4,000 church target is to produce a metanoia – mindset shift – among church leaders around the strategic need to focus on marriage for truly fruitful evangelism in the 21st century.

This metanoia includes a focus on reaching men who will soon be pastors. Toward that end, I just wrapped up an all-day workshop yesterday for Catholic seminarians in St. Louis at Kenrick-Glennon Seminary.

The theme of our all-day workshop at the Seminary was to shift these students from seeing marriage as a subject in their theology to helping them make it an object of their ministry.

The day started with my book talk, which seeks to produce that mindset shift that the future of faith is completely dependent, by God’s very design, on the health of marriage.  We introduced them to the three ingredients of sound Vision, Community, and Skills within a church-based ministry.

These men will be leading parishes in anywhere from 12-36 months.  Over the course of their life in ministry, they’ll shepherd many tens of thousands.  It was a high leverage opportunity.

I’m grateful to our generous donors for allowing Communio to serve the local church.  Ultimately, the church, because it is the Body of Christ, can produce real, lasting change to our nation and to our world. The church has done so many times before.

I’m incredibly hopeful by what we are seeing and hearing from evangelical, Protestant, and Catholic church leaders across the country.